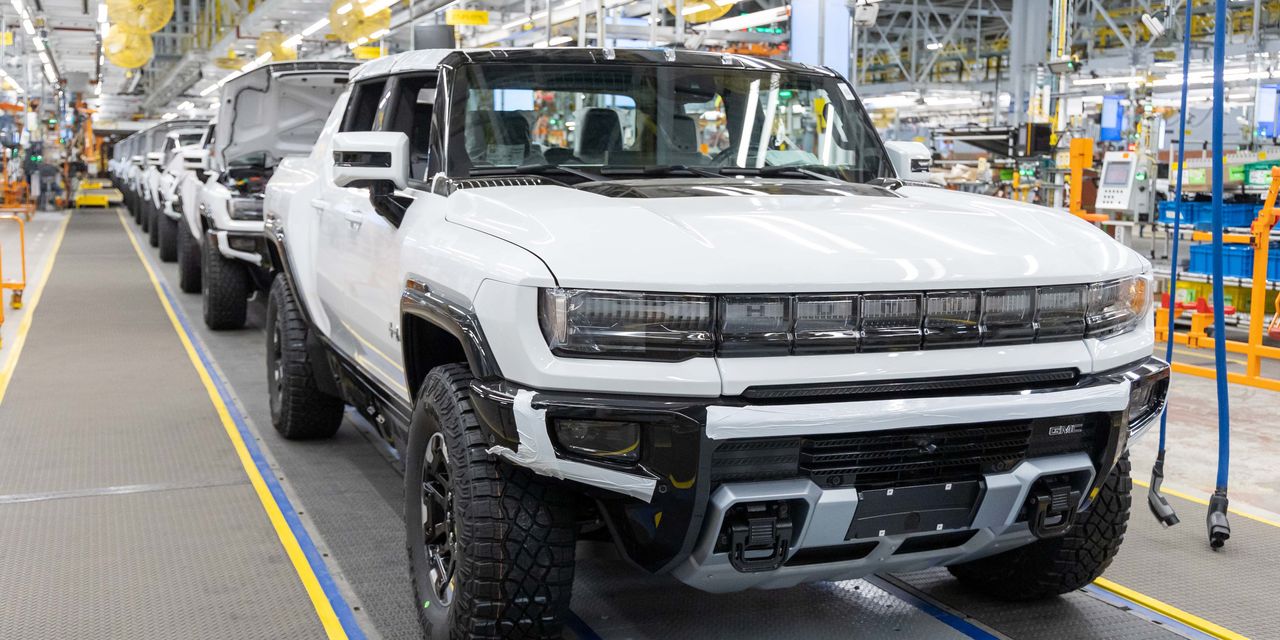 has grand ambitions and a cheap stock. That could be a winning combination for investors. But to realize it, the pace of the giant car maker’s electric-car launches must catch up to the speed of its pronouncements about them.

Investors are giving less credit to slide decks and press releases, says Credit Suisse auto analyst Dan Levy, who has an Outperform rating on GM, with a $58 price target, about 45% above its current price below $40. “The message from investors is to show us EV volume and a compelling product that show you can challenge Tesla in an EV world.”

The company defends its deliberate EV rollout pace, pointing to its lengthy development of a fitting vehicle platform for its innovative Ultium battery system. “We’ve taken the time to do it right,” Paul Jacobson, GM’s chief financial officer, tells Barron’s. “Ultium allows us to have the infrastructure to support multiple vehicle segments with the same battery platform. It allows us to scale with efficiencies that no one else can replicate.”

Jacobson recently bought $1.4 million GM shares in the open market at about $39. “The purchase speaks for itself. I think GM is undervalued and a great investment,” he says.

By 2030, General Motors aims to double its annual revenue to about $300 billion, with 40% to 50% of its automotive revenue coming from EVs, and $50 billion in sales from robo-taxis and other ventures inside its Cruise autonomous-vehicle unit.

Nothing even close to that is factored into the auto maker’s depressed stock (ticker: GM), which has tumbled about 33% this year and isn’t much above its $33 postbankruptcy 2010 initial-public-offering price. GM trades for six times projected earnings of about $7 a share in both 2022 and 2023, one of the

“The stock is very attractive. GM is not getting credit for much of anything,” says Joe Pittman, an analyst at Harris Associates, a top 10 holder of GM through its Oakmark funds. “Its core automotive business is performing well in a dynamic and complex environment, and it’s well positioned in electric vehicles and autonomous-vehicle technology that will play out over time.”

“[Investors’] message is: Show us EV volume and a compelling product that show you can challenge Tesla in an EV world.”

Why, then, does GM trade so cheaply? For one thing, investors worry that robust conditions in the auto market will cool later this year as the Federal Reserve boosts interest rates. GM also faces higher costs—$5 billion—tied to commodities and supply issues. Affordability is a problem, too, with the average selling price of a GM vehicle now $50,000, up 25% in the past two years. And GM pays no dividend and isn’t buying back stock.

But the biggest issue is clear: Wall Street is increasingly evaluating auto makers on how well they’re challenging Tesla and moving to a future in which EVs will dominate sales.

On that score, GM has done a lot of talking, while Tesla, with its Model 3 and Model Y, and

(F), with its Mustang Mach-E and F-150 Lightning, have done a lot of delivering. But that’s about to change.

Sales of the GMC Hummer electric pickup have begun. (GM has a combined 65,000 reservations for it and a companion sport utility vehicle.) On May 19, Cadillac starts taking orders for its Lyriq SUV, for deliveries beginning this summer. Recently, Chevrolet restarted the assembly lines for its Bolt hatchback and a new Bolt SUV; production had been halted since November for a battery recall. Chevy also has 140,000 reservations for its electric Silverado pickup, though deliveries won’t start until next year, when GM’s EV launches really ramp up with the introduction of electric versions of the Chevy Equinox crossover, Chevy Blazer SUV, and Hummer SUV. And BrightDrop, an under-the-radar GM electric commercial-van unit, opened its first dealership in December, near Los Angeles, with customers including

All but the Bolt models, which use an older type of battery, feature the modular Ultium vehicle platform that allows batteries and drive components to be configured in various ways, with the aim of providing the most range, power, and reliability for a specific application. In line with this, GM is building four U.S. battery plants, with the first opening this summer.

Funding for all of these projects will be costly. Of the company’s $9 billion to $10 billion in annual capital expenditure, 80% is earmarked for EVs and autonomous vehicles. But GM should be able to handle the tab. Despite chip shortages and other supply issues, General Motors’ first quarter was one of its best ever, with earnings of $2.09 a share. That topped the consensus estimate by about 40 cents, and the company boosted its 2022 profit guidance by 25 cents, to $6.50-$7.50 a share.

But those earnings are almost entirely from SUVs and pickups with internal combustion engines. While providing funding for GM’s EV transition, the ICE business doesn’t get accorded much value by investors.

GM’s balance sheet is in great shape, with $17.7 billion in cash, excluding its finance unit, and about $1 billion of net cash (cash minus debt) as of March 31. The company, however, does have about $10 billion of unfunded pension and healthcare obligations.

GM’s stake in Cruise (worth about $15 billion, according to Wall Street analysts), its finance unit, and its interest in a Chinese subsidiary could be worth 75% of GM’s entire market value, meaning its core auto business is valued at just one times projected 2022 pretax cash flow.

Cruise is a leader in autonomous-vehicle technology and could roll out robo-taxis for paying customers in San Francisco later this year, marking an industry first. A goal of $50 billion in revenue by 2030 is a huge stretch, but if GM can demonstrate success in San Francisco, that could lift the stock.

The proof of the pudding, however, will be in the numbers. Hobbled by the halt in Bolt production, GM sold a mere 475 EVs in North America in the first quarter, while Tesla delivered over 300,000 globally.

Investor Ross Margolies of Stelliam Investment Management says the GM story is simple. It depends on “whether you believe they can execute in EVs.” He’s optimistic that GM will succeed.

The latest test of that has started. General Motors aims to sell 400,000 EVs in North America in 2022-23, with most of the sales weighted toward next year. And it plans to produce one million in 2025. Given its electric product pipeline, its chance of hitting these targets seems good. The race, as every schoolchild knows, sometimes goes to the tortoise, not the hare.

coloring house designs
We use cookies on our website to give you the most relevant experience by remembering your preferences and repeat visits. By clicking “Accept All”, you consent to the use of ALL the cookies. However, you may visit "Cookie Settings" to provide a controlled consent.
Cookie SettingsAccept All
Manage consent